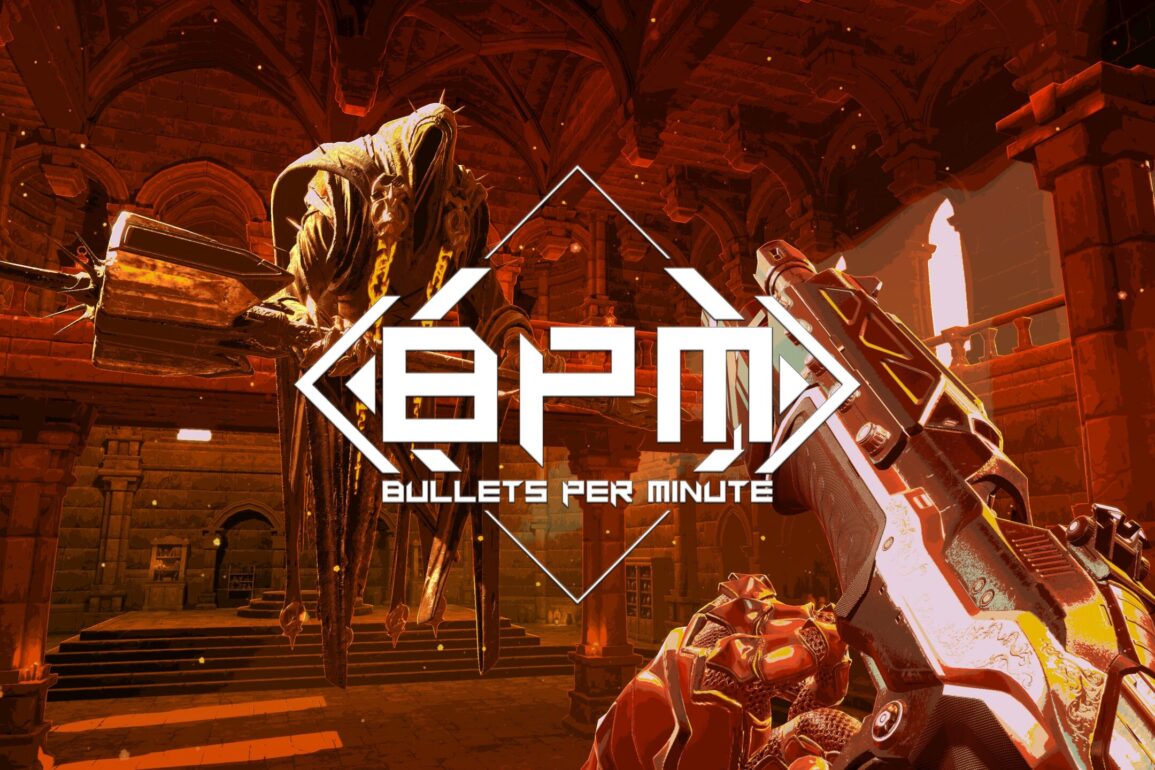 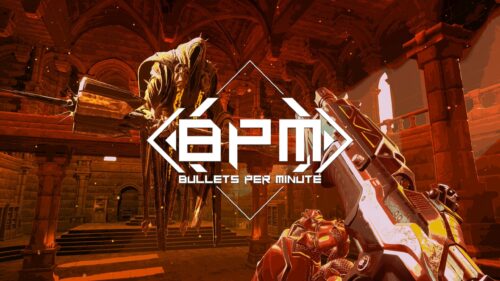 BPM: BULLETS PER MINUTE is an indie game developed by Awe Interactive. It’s currently available on Steam, GOG, with the console versions coming next year.

BPM is a rhythm fps game. The goal is simple: defeat enemies to advance. All the actions need to be timed to the beat – shooting, dashing, reloading. Staying on rhythm is the key for victory. I really like the concept of BPM – listening to a great soundtrack while blasting monsters feels good.

It’s a roguelite, which means that the level will be different every time. Each run feels unique. All the enemies in the room need to be defeated to advance and finally get to the floor’s boss. The fights require fast reactions and staying on rhythm. They feel challenging, even on the easiest difficulty. After defeating them, an entrance for the next level appears.

There are different opponents, both big and small, strong and weak. Some fire projectiles, others strike up close. The enemies also have to respect the laws of the rhythm and can only attack on beat. This applies to everyone, even bosses.

Treasure chests appear after cleaning a room. The reward depends on the player’s performance, whether they stayed on beat and evaded enemies attacks. Some require keys, which can spawn randomly or be looted from corpses. These usually have better loot than normal ones. Each room has one real chest, but there can be extra decoys that spawn a monster instead.

Shops use coins as currency. They can be found by opening chests or killing enemies. The armory sells new weapons and armour, while Huginn’s shop has HP potions and various items, which will all be useful in the battles to come. Other than buying, new equipment can also be found by opening various chests or sacrificing coins, health or keys to shrines.

More characters can be unlocked by completing levels and beating bosses. Every character, except the last one, can be gotten on the “Easy” difficulty. The characters have different abilities, weapons and gimmicks. Some have more health than others, others get unique skills. Each one has its own weapon, with some of them impossible to unequip, such as Njord’s magic, where he uses his hands to blast down enemies.

Challenges are unlocked after finishing a run for the first time. Currently there are only two – retro mode and boss rush. They’re both on the hard difficulty. Boss rush lets the player fight all the game’s bosses in a small room. It’s one on one, so it’s fair. Retro mode however is a bit more interesting. The game gets a pixelated look, reminiscent of many retro shooters. The gun is centered and movement is a lot faster than before. The experience is different, yet fun. Unlike in many classic shooters however, the enemies don’t really stand out from the backdrop, which makes it difficult to notice them.

Options have six categories: Game, Controller, Keyboard & Mouse, Audio, Video and User Interface. Game has crosshair and rhythm options, HUD and map. There are different layouts for the controller, but no way to rebind keys. Keyboard buttons can still be rebound. As expected, audio has different sliders to change the sound volume. Video contains resolution, view mode settings and post processing. The filter saturation modifying is detailed, with 4 sliders to change. User Interface has options for UI Alpha and UI Scaling. There’s also a language option, it hasn’t been implemented yet however. The game definitely has quite a lot of options, but I would’ve liked if we had the choice to disable individual aspects of the HUD separately. Currently it’s either just the minimap or everything. Having things like texture and effect quality would’ve also been nice, because currently it’s just mostly post processing and resolution scaling. I had performance issues when a lot of particles were on screen, mainly during boss fights.

Bullets per Minute looks good and the soundtrack is great. I had to listen to it closely, staying on rhythm. It didn’t get old, even after hearing it countless times. The assets themselves are from Paragon, but they fit the game’s theme.

Awe Interactive provided us with a Steam code for review purposes. 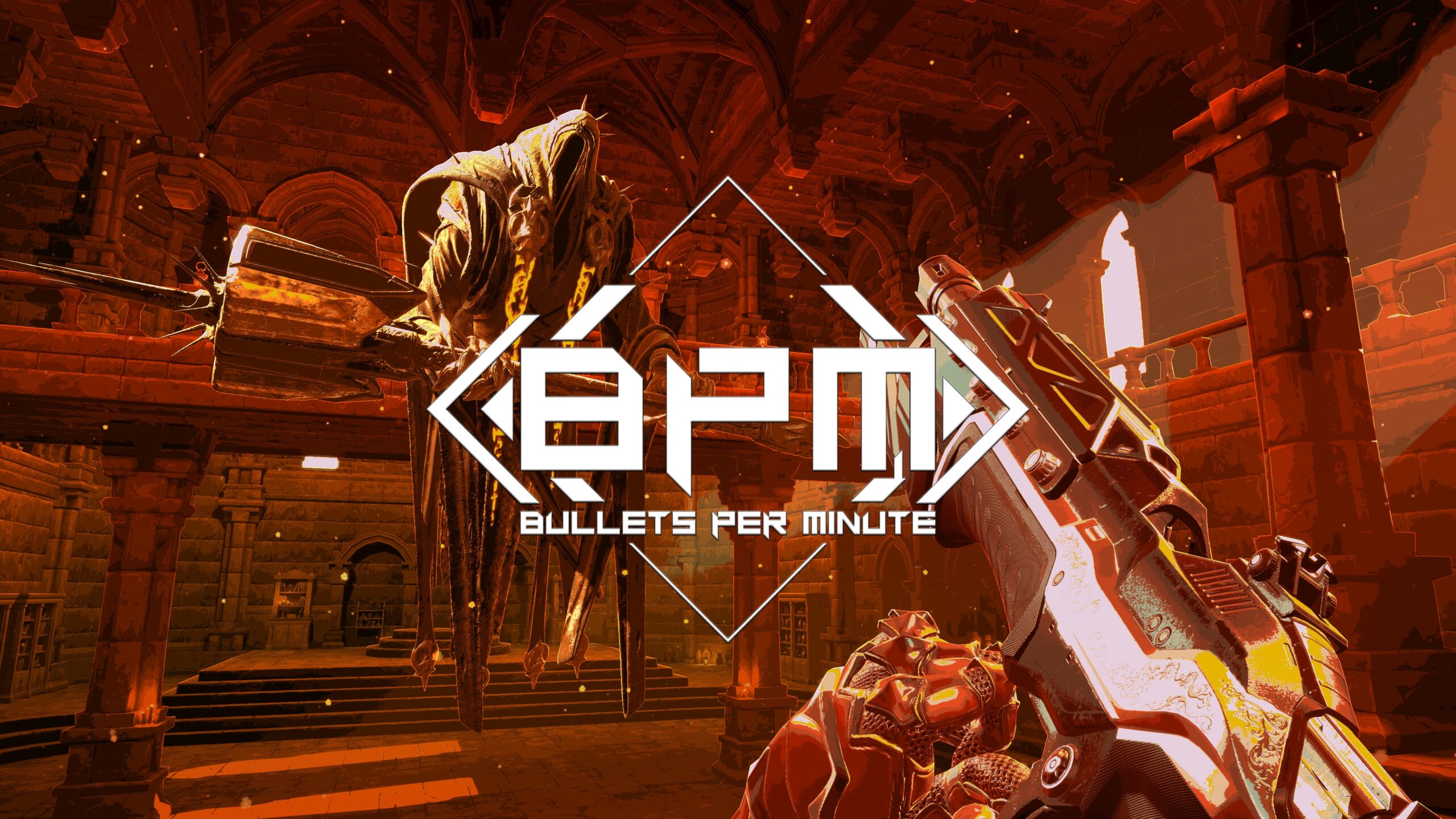 BPM – REVIEWS PER MINUTE
Verdict
BPM: Bullets Per Minute is a fun take on an old genre. It’s definitely challenging and takes some time to get used to, but it’s fun. The levels are procedurally-generated, which means that the rooms can get old fast. Despite that, it’s still fun to experience all the different weapons and characters. There is not a lot of content, but it feels fresh and I can’t wait to see where they go from here.
THE GOOD
Good graphics
Good soundtrack
Variety
Unique concept
THE BAD
Repetitive rooms
Lack of content
4