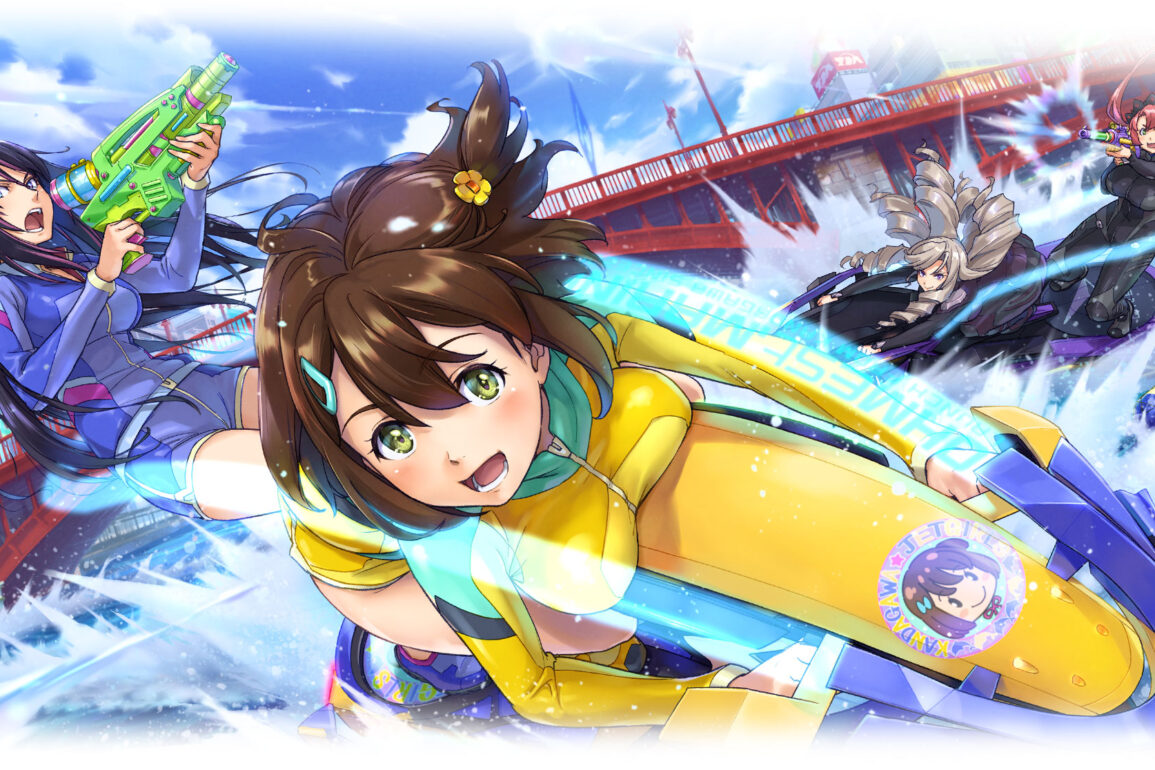 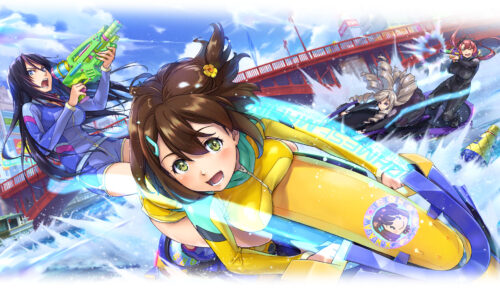 Kandagawa Jet Girls is an incredibly fun jet ski racing game made by Honey Select with a few problems that hold it back from being great.

The game’s Story Mode is the main selling point so let’s go over that first, you play as girls from different schools who take part in Jet Racing in the Kanda River, where the game got its title from. The goal in each arc varies a little, for some, like Namiki Rin and Misa Aoi. Their goal is to win the Kandagawa Cup, a tournament for High School jet racers, but not all the characters share this ambition. For example, the Hijiribashi girls, their arc mainly revolves around one of the girls turning into a delinquent when she gets hyped up, and how they deal with that.

The stories are all quite wholesome, fun, and very lighthearted. Their main purpose is to move the plot forward and to let you race the other characters. While the game does have a villain, they don’t really show up until the end, but they are hilariously evil, so much so that I did chuckle a little bit once or twice while reading their dialogue.

The gameplay is quite interesting, it feels like the team took a lot of inspiration from games like Mario Kart with elements like power sliding to get small boosts. The EPD meter in bottom the right corner of the screen gives the player a more powerful boost that lets them go a lot faster until the meter runs out. When it maxes out, a Special Technique can be used, which can vary from getting a watermelon cannon to giving the driver infinite boost for a short amount of time.

There are eight levels with three map layouts to keep it from getting too repetitive, though by the end of the game they definitely do start to feel very repetitive. The player can also pick up weapons that do a bit more damage to enemies than the regular water gun. These weapons feel very clunky, luckily they’re rarely if ever required to win a race, which leads me onto my next point.

The games AI in the Story Mode is ridiculously stupid, most “easy” difficulty modes in other games are harder than this game’s story mode. It makes it a chore to do some of the optional missions which can range from reaching a top speed of 120km/h (Sorry imperial users!), to using pickup weapons on four enemies throughout a race. I can’t think of any racing game I’ve ever played where the AI fell this far behind. It’s such a shame because you can actually set the AI difficulty when doing races in Free Mode. It actually makes the game feel a whole lot more balanced there. This is something I hope can be fixed with a patch later down the line. Adding a difficulty select for the Story Mode would improve the game immensely.

The game also has other stuff to do than the main story mode, such as the Clubroom. Where you can upgrade the jet machines, customize characters outfits, buy stuff from the shop, and access mini games, or Extracurriculars, as they call them.

The Dressing Room and Garage have a ton of stuff to modify, you can make the characters look like they’re someone else entirely, as I did with Namiki. The Garage is where I probably spent the most of my time in the Clubroom, since that’s where upgrades are applied to the Jet Machines, as you progress through each arc, you get more points to spend on upgrades for the Jet Machines, which sadly doesn’t matter too much when the game is as easy as it is.

The Extracurriculars are short and simple mini games to help take your mind off the jet racing. My personal favorite mini game is Jet Machine Cleaning, where the player has to press the correct buttons on screen with a timer going, it’s fun to try to see how many points you can rack up over the course of 45 seconds, and it also serves as a quite effective way to grind points to use at the shop. Other Extracurriculars include Mopping, Treadmill Run, and Aerials, which follow a similar formula and are also very fun.

Then there’s Free Race, where the player can race on any level against any character, difficulty can be adjusted as well to actually add a bit of challenge to the game. There are also time trials, where you race against a ghost which is also fun, but the ghosts that are built into the game are quite easy to beat, there is also a trophy for each time trial. And then there’s the leaderboard, which is pretty self explanitory, one nice feature is that you can download the ghost of players in the top 10 if you want to see how they did it.

And lastly, there’s Online Mode, where you can race against others, there’s a Ranked and Casual mode, I only tried the Casual Mode, but it works as expected, racing with other players online. I do like the fact you can set the lobby to be Beginners or Experts only in Casual, helps make matches a bit more fair.

And last but certainly not least. Performance and Graphics, the game runs in the Unity engine, seems to be a native 1080p with no AA on PS4, but I’m not 100% sure. Sadly, the game performs very poorly on PS4, the game has a 60fps cap and it seems to use vsync? Not quite sure since it still has screen tearing at times. It occasionally jumps up to 60fps, but it stays at 30fps or below most of the time, this sadly means the PS4 version feels very rough performance wise. I also saw some footage of the PC version, while we didn’t get the chance to check out the PC version ourselves. it did seem to run a lot better with a decent variety of graphical settings available as well. With the PS5 on the way, I hope the game can take advantage of it’s power to hit a locked 60fps or even 120fps with a patch? 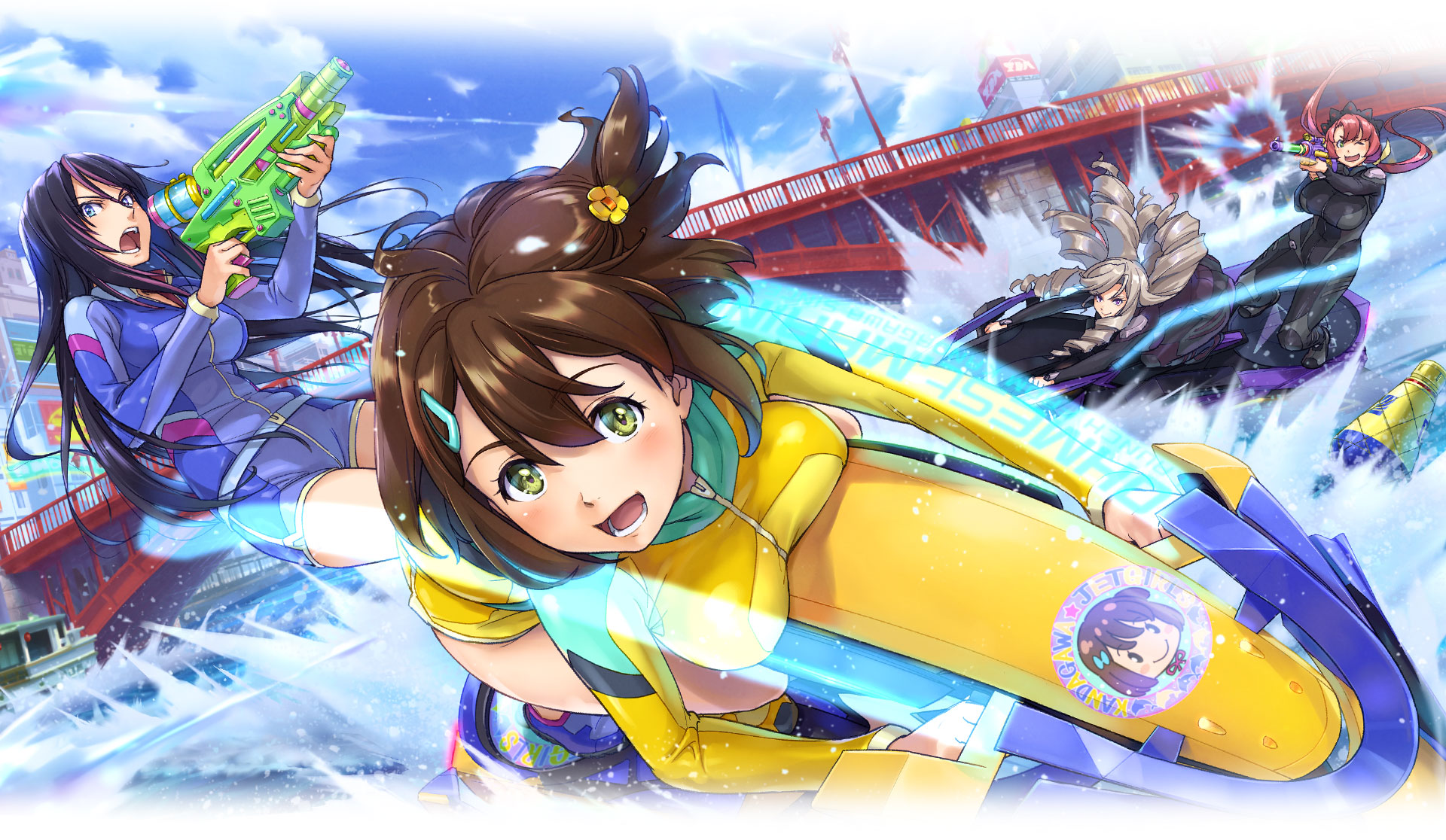 Kandagawa Jet Girls Review
Verdict
Kandagawa Jet Girls is an immensely fun racing game with some unfortunate problems that hold it back from being great. The performance and AI can be fixed with patches, but the game still gets very repetitive and same'y towards the end. I would love to see a sequel to this game some day that fixes the problem this game had whilst expanding the scope.
The good
Incredibly fun
Beautiful visuals
The bad
Way too easy
Clunky gameplay
Bad performance on PS4
3.8