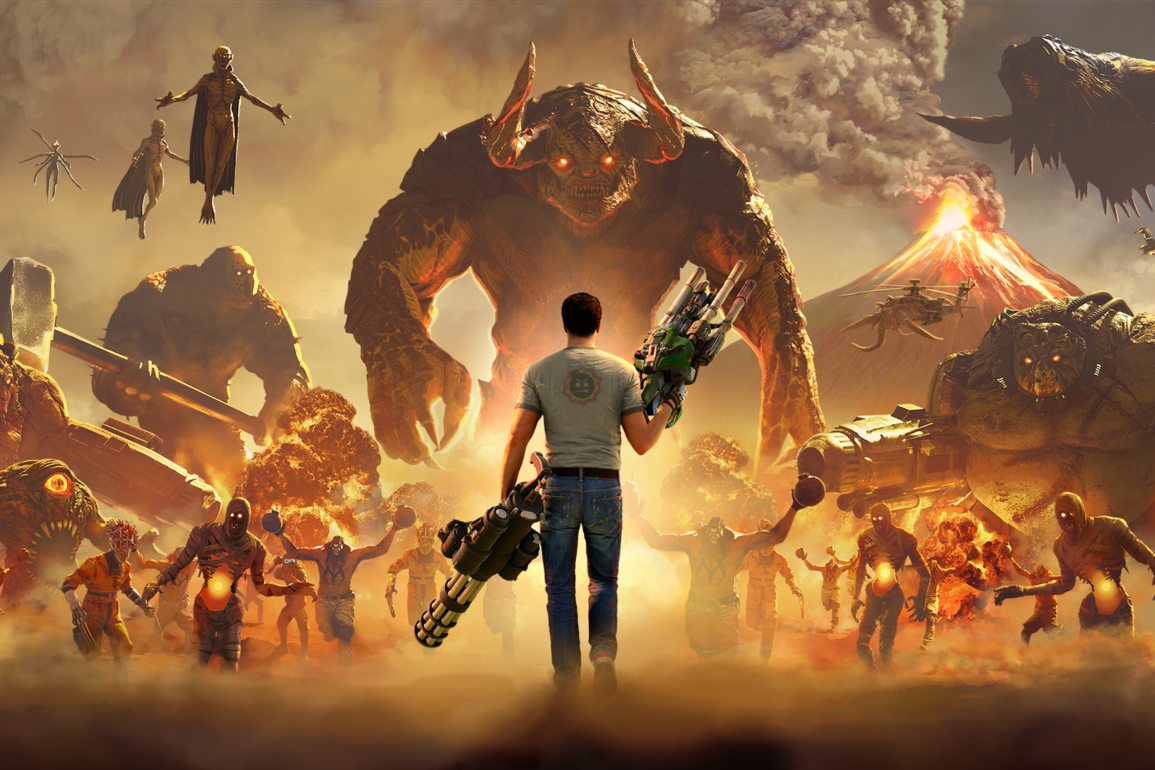 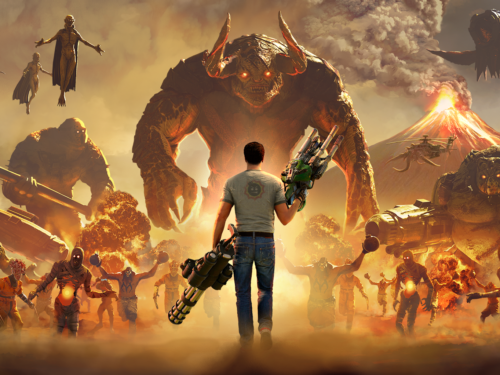 Serious Sam 4 is the latest in the long-running series of totally serious arena shooters by the Croatian indie developer Croteam. It’s also seriously disappointing, just like my puns.

I’ll cut straight to the chase here – come on Croteam, did you seriously think this game is releasable? Serious Sam 4 ranges in quality anywhere from a really good experience to straight up a seriously frustrating mess. Doesn’t help that technically, SS4 is seriously terrible as well – enemies get stuck outside the map, graphics can look like an early PS3 game, and the game is constantly running at an unjustifiably low framerate.

It’s especially disappointing to see these blemishes since underneath the game can actually be really good occasionally. So what is it about Serious Sam 4 that is so good? Well, all of the weapons are a serious upgrade from BFE. These things really pack a punch, even the default pistol, and are immensely satisfying to use. The enemy variety is, as per Serious Sam tradition, strong as well, and some of the more well-designed encounters show a serious understanding from Croteam of what makes their game fun.

Serious Sam 4 also manages to make the game a lot more beginner-friendly. Seriously! For example, the markers can be a blessing sometimes in the massive levels that the series is known for. Speaking of, another new introduction to the game, which directly utilizes the new quality of life features in the form of side-quests. These take you to a specially designed part of the map, in which you have to perform a specific task – which usually happens to be kicking alien butt, in seriously large quantities. These are usually pretty well designed, although the game really likes to rely on spawning multiple instances of the first boss as a way of artificially challenging the player.

Side quests aren’t the only part of the game that suffers from this seriously artificial challenge, however. A lot of the encounters feel like the designers purposefully put you against enemies that aren’t well suited to the environment you’re fighting in, forcing you to fight against the mechanics themselves. It never really felt fully intentional, though. I don’t think the devs are just trolls,  I think that this is just the result of the game seriously needing more time in the oven.

Another victim of this seems to be the mechs. In SS4, you can seriously pilot a Popemobile-turned mech straight from the Vatican, and you’d expect that to be the highlight of the game, right? But clearly the mechs didn’t get enough playtesting, because this ridiculous scenario manages to be seriously underwhelming, and just straight-up boring. The mech is really, really slow, and its basic dodge move has a ridiculous cooldown the first time around. Thankfully this is fixed in the later mech sections, but why make such a bad first impression to begin with?

Not to mention the seriously awful bossfight at the end of that section – the best way to do it was to quick-save, run up a meter in front of it and cheese it, hoping I would be standing in the exact spot where it couldn’t hit me.

Bosses in particular are really hit or miss. I could seriously count on one hand the amount of them, too. And almost none of them were particularly enjoyable. Usually bosses are just tedious damage dumps, and in the worst case scenario, they are like the one I have described above.

You might have noticed that I have seriously failed to mention the story so far. I’m really torn on it. I’m not sure if it’s the worst part of the game or if that is the technical state. But let’s not get ahead of ourselves.

Serious Sam 4 is a prequel to Serious Sam 3: BFE, which was a prequel to Serious Sam TFE. If you’re looking for an ending for the decades of trying to hunt the big main bad guy of the series, Mental, down… Keep looking, because you’re seriously not gonna find anything here. Instead, you will find tons of seriously unfunny and forced jokes (as forced as me using “seriously” in every other sentence in this review), and Sam… grieving with the loss of his comrades?

It seriously doesn’t fit anything else in the game and it’s always strange when the game throws one of these nobodies into a boss’ jaw to show how big and powerful he is, and the game expects you to actually be sad for this character you barely knew, after a seriously goofy death scene.

By the way, the cutscenes run terribly. These do not look good, the animations are atrocious, the eyes on every character look seriously terrifying, and it all runs at about half the performance of the main game, which is barely acceptable for the level of graphical quality anyways. What makes this seriously baffling is that Croteam have a really good engine that they’re working on here, and this game manages to both run and look worse than Serious Sam 3. It’s also glitchy, like, seriously glitchy. Almost every level has a spot where you can accidentally go out of bounds, enemies constantly get stuck on everything, audio can weird out, some models are in an A-pose, I found multiple instances of a bright blue light on the floor just being there for no reason.

We live in an age where even the most unfinished of games can eventually get patched to a good technical state. But unfortunately, there are just some things in Serious Sam 4 that can’t just be easily patched. A lot of the design choices are just something that will stay there forever. Seriously unfortunate.

Review copy was provided to us by Devolver Digital.

Serious Sam 4 Review – Seriously Unfinished
VERDICT
Serious Sam 4 is a frustrating case of serious missed potential. In the sea of bad performance, undercooked encounters and a laughable story, somewhere there is a great game here, that might have been capable of becoming the best in the series.
THE GOOD
WEAPONS
FIGHTS CAN BE FUN
SOUND DESIGN...
THE BAD
...WHEN IT WORKS
EVERYTHING ELSE
2.3