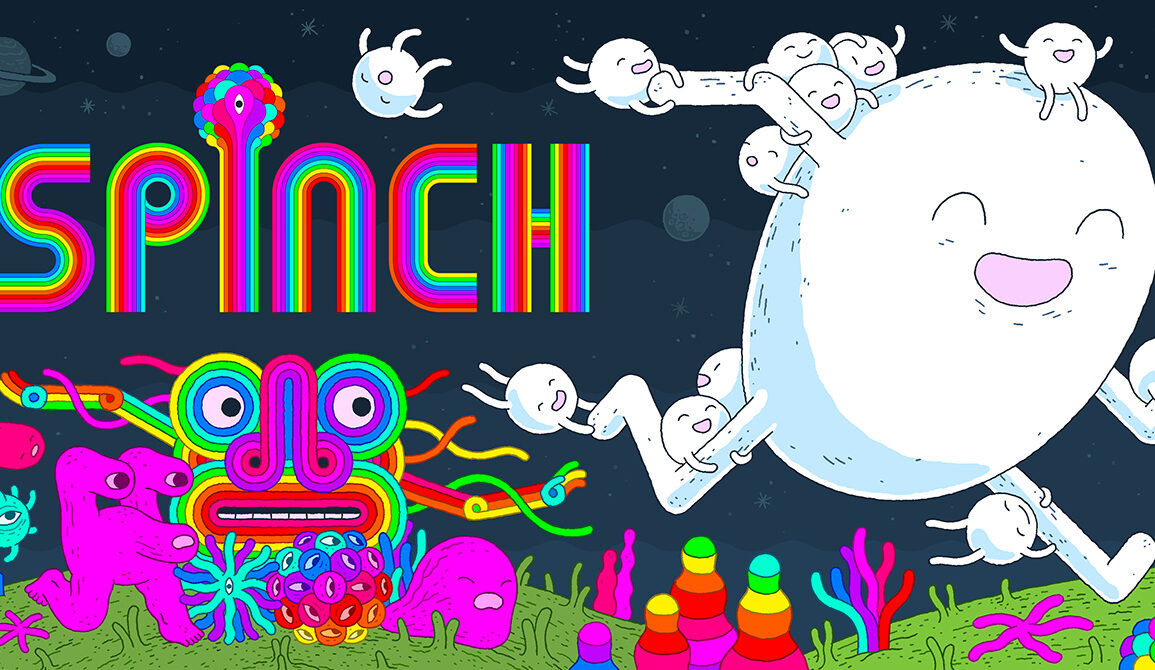 Spinch dashes to Steam and Switch

It’s a 2D platformer with psychedelic visuals. The game is very colourful, the world and character design looks interesting. It’s definitely unique. The chiptune soundtrack sounds great, but sometimes a bit repetitive. The art is definitely a strong point that makes this game stand out from the rest in the genre.

The main character is called Spinch, a creature trying to find its missing offspring in a world filled with colour, different obstacles and enemies. The goal is to get to the end of the level. There are also optional collectibles, such as cubes, children and bonus levels.

It plays like a typical platformer – don’t die and make it to the end of the level. There are limited lives, usually 3. Running out of lives means death and restarting from the previous checkpoint. The controls are simple: move, jump and dash. Dashing is very important, because there are levels where the player needs to run from an enemy or get to a certain place in time. Without dashing, it’d be impossible. The controls are tight, I never felt like I died due to the controls.

There are six different worlds, each with 6 levels, except the last one. At the end of each world, there’s a boss fight. Levels range from neon plains, to experiment tanks, to frozen icelands, all the way to outer space. It’s not just the visuals that are different, there are also new mechanics and enemies. The mechanics range from disappearing platforms, falling icicles and upside down or underwater areas. The more you play, the harder it gets. Some levels require speed, for example when a flying creature dropping nukes every once in a while. If the player is not in cover, they’ll die. They need to be fast and precise.

There’s enough variety between levels. Trying to beat high scores definitely adds a lot of replayability. There’s a timer at the top of the screen that is counting down time. This is a great feature, especially for speedrunners. There are also bonus levels, where the goal is to catch the cousins, little pink creatures. A certain percent needs to be caught to beat the level.

There are different kinds of enemies. Some can be killed, some must be evaded, some are fast, some slow. There are both close range and long ranged enemies. In some cases enemies can be used to the player’s advantage, to break down doors to progress or to kill other enemies. By collecting enough cubes, the player can also become invincible for a short amount of time, which lets them run through any enemy, even those who can’t be killed normally.

At the end of each world there’s a boss fight. The concept is mostly the same: launch children at the boss until it dies. There are two buttons that need to be pressed: one to reload children into the weapon and the other to fire. They’re at the opposite sides of the level. Each boss has its own pattern that needs to be learned to defeat them.

The tutorial shows controller keybinds, even when using a keyboard. I had to press random buttons to figure out which button does what. The controls settings weren’t helpful, because for some reason the dash button just appears as a square icon, instead of the key it actually is bound to.

There’s not much to the options. We have controls, toggles for SFX and Music and different languages. Under controls there are only jump and dash buttons, there’s no way to change movement keys. I feel like the options are lacking. There’s no graphics options, not even changing resolution, window mode or toggling VSync. The controls menu is missing most of the controls. I feel like they could’ve done a better job with this. ESC doesn’t work for going back from a menu, arrow keys or WASD have to be used to navigate the menu and space for selecting things. Mouse can’t be used in the menu at all.

Akupara Games provided us with a Steam code for review purposes.

Spinch dashes to Steam and Switch
Verdict
Spinch is a fun 2D platformer with psychedelic visuals. It’s colourful, there’s enough variety between levels and enemies. You can beat your high scores, The controls are tight, platforming feels good. The game looks and sounds unique. There aren’t any graphical options, which is a shame.
THE GOOD
Unique visuals
Tight controls
Replayability
THE BAD
No graphics options
Lack of keybind options
Confusing tutorial
4