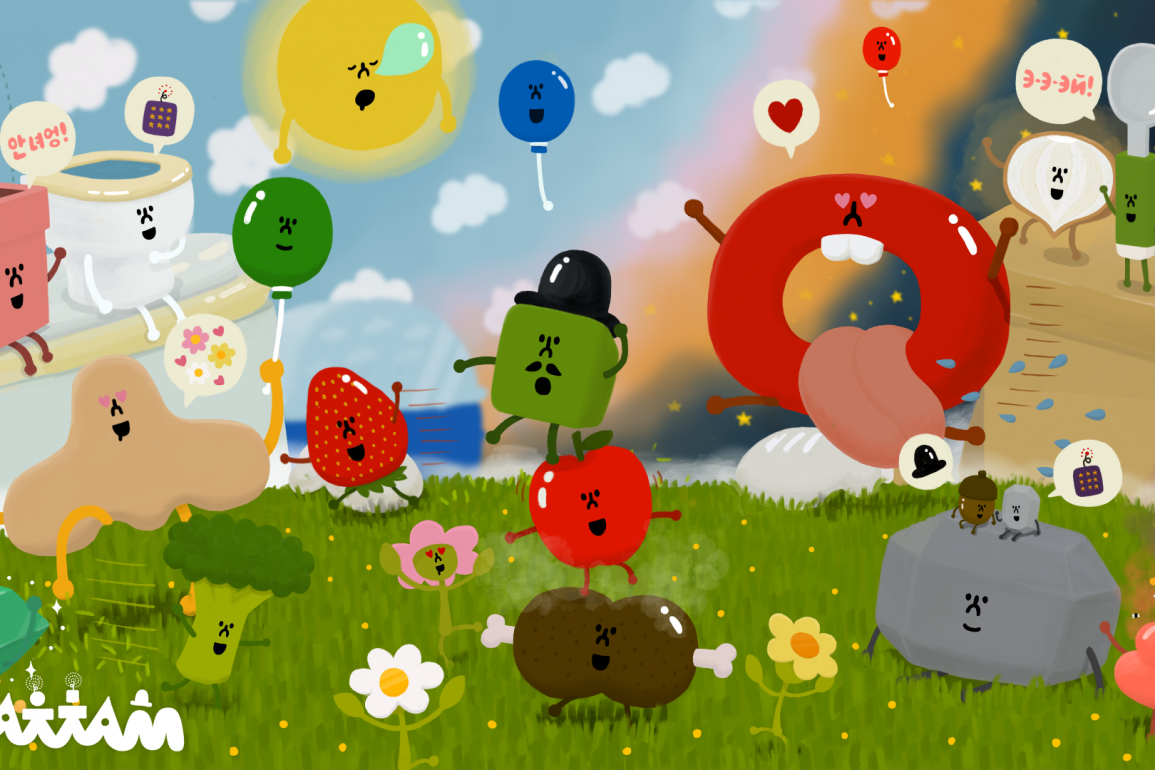 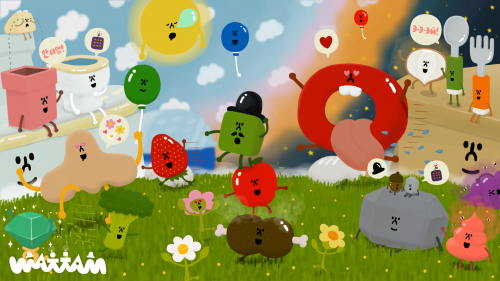 Wattam is a quirky, absurd and colourful adventure in a world filled with anthropomorphised objects. The game was directed by Keita Takahashi, creator of titles such as Katamari Damacy and Noby Noby Boy, and developed by Funomena. The game is currently available on PlayStation 4 and Epic Games Store, with the Steam version coming later this year.

The game starts by having the player control a green cube with a bowler hat, with a bomb tucked under it. Throughout it you’ll make lots of new friends and unlock new worlds, all of which are playable and controllable. They do move around and interact on their own too. Everything is alive, even the land itself. There’s also a plot, but the main focus of the game is unlocking more characters to control. The story isn’t long, it took me around 4 hours to finish, but it was enjoyable.

By solving puzzles you can uncover the secrets behind this odd world. Most of the puzzles are quite simple, with this being a casual experience. Wattam constantly holds your hand. I wish it’d let me figure out the puzzles myself, without telling what to do. Thankfully it still manages to be interesting, thanks to the charming atmosphere.

The gameplay loop is simple. Completing a task unlocks new characters, and doing enough of them lets you access a new season. These usually range from growing a tree, eating someone or pooping out a necessary character. It can get repetitive quickly, because there’s not a lot of variety in terms of tasks. Certain objectives also require a specific character, which can get tedious, because they can be scattered around the four different islands and they move around on their own. They need to be transported to the correct island, which is annoying when a quest requires multiple people.  Even though there’s no limit to how many objects can be transported at once, they tend to run away unless they’re holding hands with everyone, which makes moving them across levels tedious.

Wattam has a lot of characters, ranging from poop, fruits, numbers, shapes and utensils. The characters look different and act mostly the same, but they come in different sizes and some have unique features, such as a desk fan that can blow wind, hats that can cause an explosion and a tree that can eat others to turn them into meat or Christmas ornaments and lawnmowers that can mow the lawn. These abilities don’t find much usage outside of the request they were introduced in.

Friendship and co-operation are very important in this game. Different characters need to be used to accomplish your goals. The game can’t be completed with just one character. To grow a tree, the citizens need to form a friendship circle and run around the tree until it grows. Only with the power of friendship can anything be accomplished here.

I played the game on PC. The PC port was acceptable, but could’ve been better. The controls felt weird, especially the camera. Right click needs to be held down to move it around. The settings menu in Wattam has 4 categories: graphics, audio, language and controls. In the graphics settings we have a toggle for Full screen, options to change resolution and brightness and toggling SSAO and Anti-Aliasing. Under audio settings, there’s 4 sliders, for Master Volume, Music Volume, SFX Volume and Voice Volume. There’s also an option for changing the Speaker Mode. Under Language you can change the game’s language. The last option is Controls, where you can invert the rotation and zoom of the camera and change the sensitivity. Vibration can also be toggled. There are no options for rebinding keys, which is a shame. The graphics options aren’t impressive, PC games usually have more options than that. There isn’t even a way to disable effects such as Depth of Field. There were frame rate drops, especially when a lot of characters or effects were on screen. I’d imagine it would be even worse on lower end computers, as there are barely any options to control the graphical quality. The issues were definitely distracting, but they didn’t take away from my overall enjoyment.

Annapurna Interactive provided us with a Wattam EGS code for review purposes. 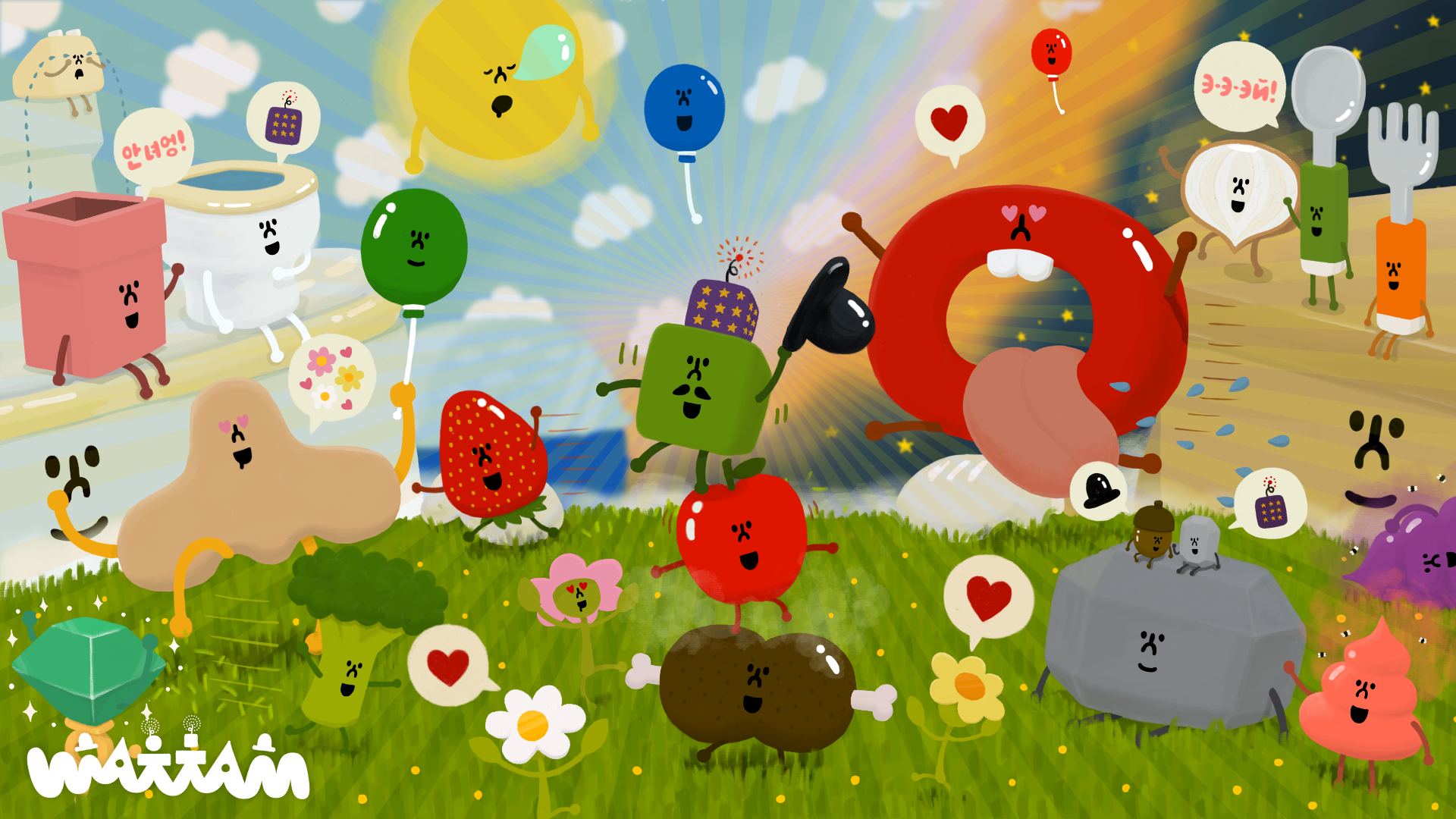 Wattam Review
Verdict
Wattam is a fun, quirky game. It’s art style is cute, the soundtrack is good, and while gameplay may get repetitive, the charm makes up for it. It’s also fun to mess around with the physics and see what the game can handle. It’s like a big toybox.
The Good
Great for all ages
Charming atmosphere
Cute art style
Good soundtrack
Fun and interactive physics
The Bad
Repetitive gameplay
Frame rate problems
Options lack some essential settings
4.2