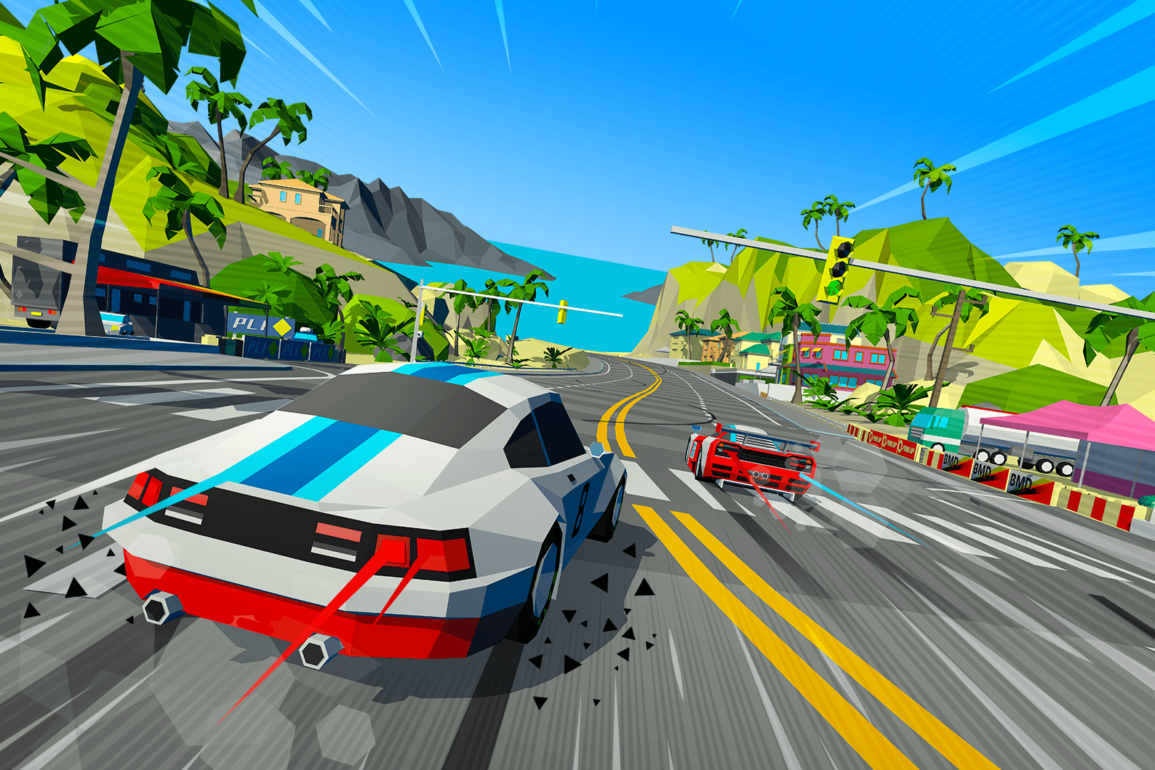 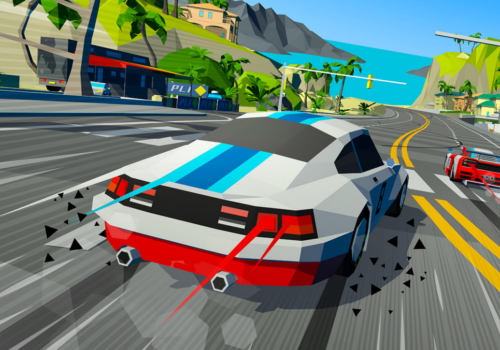 I’m not much of a multiplayer guy. The only multiplayer game I play nowadays is GTA Online, and in that you have to glitch into a solo session anyways, unless you don’t care about your sanity slowly deteriorating away. I mention this right off the bat because Hotshot Racing seems to be aiming to be a multiplayer game – which is a huge misplacement of their priorities, in my opinion.

Hotshot Racing is a throwback arcade racer developed by Sumo Digital, along the style of games such as, obviously, Virtua Racing in its graphical presentation, games like Ridge Racer, and…. Sonic & All Stars Racing?

Yes, it utilizes Sumo’s own proprietary engine, the same one used in their kart racers, and the game feels pretty similar in the drift physics to the Sonic kart racers – which is a really good thing. The driving feels snappy, and cars slide in a satisfying, and controllable arc – a really good system for an arcade racer.

The visuals stand out thanks to their style – the game really looks nice. It feels like a logical upgrade of the textureless style of the Virtua Racing games – with a lot more polygons, better lighting, and just a massive increase in detail across the board. Hotshot Racing’s artstyle is just great and it’s definitely one of the highlights of the short experience.

You may have noticed I used the word “short”, and sadly there is a reason for that. Hotshot Racing will take you under 2 hours to finish with a single character. There are eight of them, but they do not differ enough to warrant repeat playthroughs. Especially if you don’t just enjoy racing for the sake of it, stuck inside the limited range of 16 maps across 4 environments. These are sadly very simple and quickly blend together, often having little elevation changes and simple turns. The desert tracks are the best in this regard, with a lot of tunnels going down under buildings, and little hills causing you to jump out in the air – and a good jump is always fun.

You probably won’t enjoy the racing enough though, and that’s thanks to the AI. I’ll just be honest with you. The AI is terrible. It can drive well enough, I guess, but the amount of rubber-banding is just plain unacceptable. The AI will catch up to you in a second from a really long distance, just to slam the brakes right before the finish line, giving you an unsatisfactory win. It also likes to push you off the road for no reason while dashing forward at unachievable speeds, so I guess that was done so it isn’t annoying. But it still is.

The fix to that is the aforementioned multiplayer though, right? Well… no. I tried getting into a game twice in peak hours for my region and I found one singular player. That wasn’t enough to start a session, though. Shame I couldn’t show off my incredible customized car. I appreciate the addition by the way, even if it isn’t really worth it.

It’s really hard reviewing a game like this. Because, I mean, what can I even say? I wish I got to try out the multiplayer, at least, but even then, a multiplayer component seems to be an ill match for this type of racer.

What’s interesting to note is that the game has already announced a free DLC adding more content. It seems that the developers already realize how little content the game has – and I hope that eventually the game will be able to realize its full potential. But as it stands?

Hotshot Racing is a decent arcade racer with an unbearably low amount of content and an AI that will make you not want to repeat that content after you finish it. It’s a shame, because the game really has potential. I’ll stick to Ridge Racer 7 for my arcade racing fix for now. 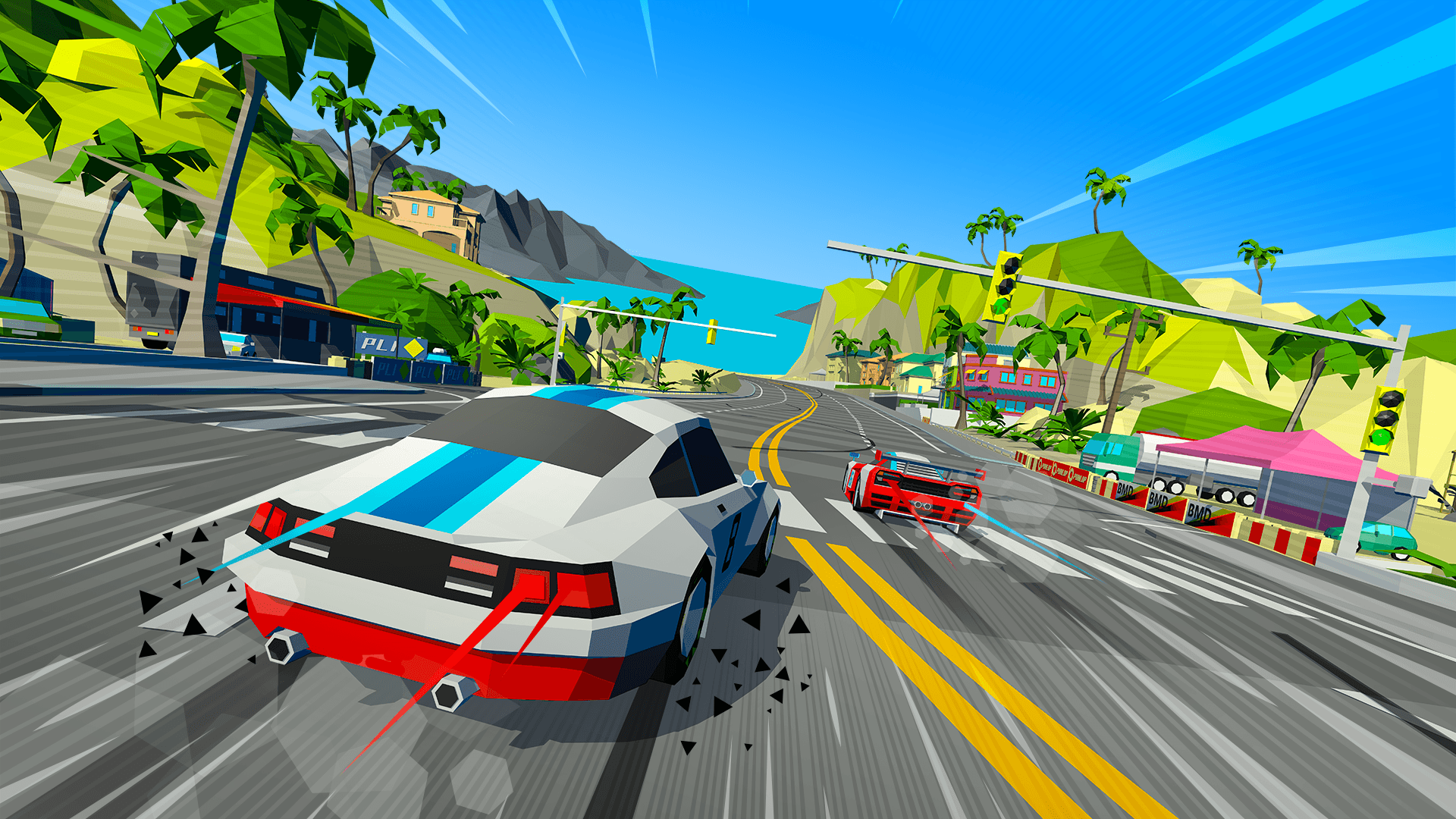 Hotshot Racing Review – Style over Substance
VERDICT
While a fine arcade racer, Hotshot Racing's priorities were not quite where they needed to be. With bad AI, and a big need for new content, I wish the resources put into multiplayer were put in places that really needed them.
THE GOOD
Presentation
Driving Physics
Customization
THE BAD
Awful AI
Track variety
Multiplayer focus
Short length
3.4 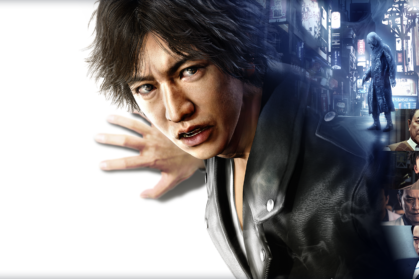